What is mining in simple words

This is perhaps the main mining article on this blog. Anyone who wants to learn more about this topic should start with it. If you are interested in this topic and want to try mining, then you need to understand how it works in general. And it is enough to read this one article for this.

Part 1. What is mining in Blockchain

Mining is just a system to keep the blockchain running. Therefore, first of all, you need to deal with it.

Blockchain is a decentralized payment system. It is designed to make payments anonymous and secure. Traditional electronic payment systems like Visa, MasterCard or PayPal are centralized. Their data is stored on servers of payment systems, banks, and so on. That is, in theory, they can be hacked / captured / destroyed. Also, they are not anonymous, because you can track the user by phone number, bank card, and so on.

The blockchain has no central system. All calculations are performed by miners’ computers. They process transactions (proof work), iterate over the hash values ​​and receive payment in the form of new cryptocurrencies as a reward. In order for a transaction in the network to be confirmed through proof of work, it must be confirmed by each participant in the network. To do this, they save information about the transaction in an encrypted form (in the form of a hash). These calculations require a lot of power, what is why the complexity of the network is growing, and so many miners have to be involved.

Thus, the system can operate safely (because millions of computers around the world will have to be shut down to destroy it) and anonymously (because your transactions can only be traced if your name and wallet number will be known). 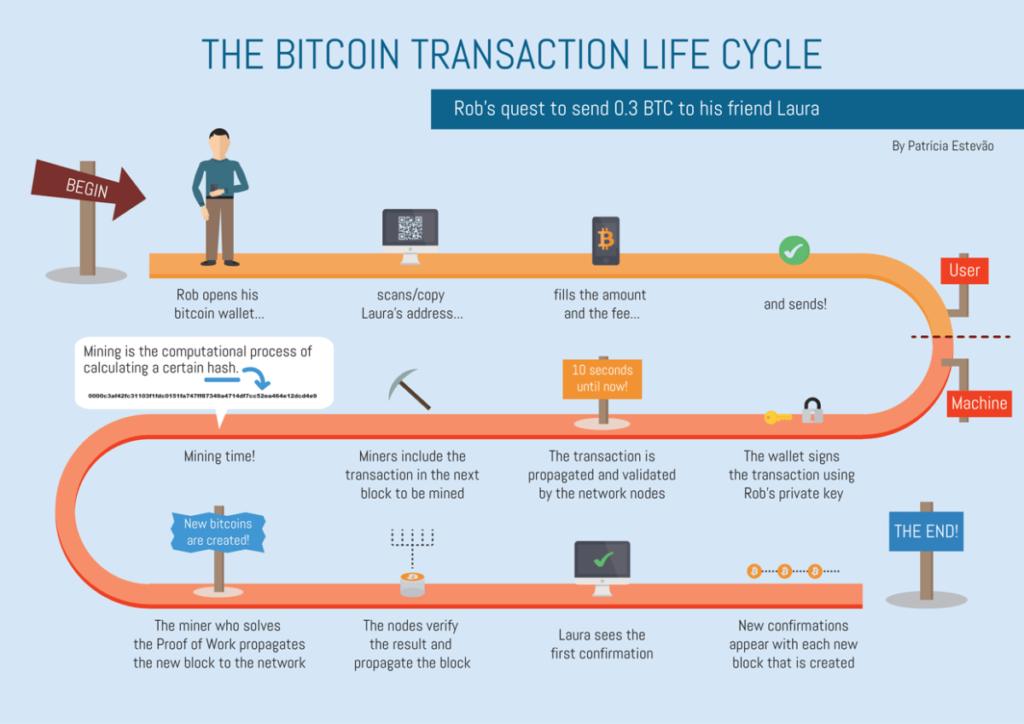 This is how the block calculations of major coins work, including Bitcoin, Bitcoin Cash, Ethereum, Ethereum Classic, Litecoin and others.

Bitcoin is not transferred as often as dollars, so it is still tolerable.

Another difficulty is the resources that are needed for the blockchain to work. It was enough to connect to the network using a personal computer of that time at the end of the 2000s, and that was already enough. Now even a powerful gaming computer is not good enough for this purpose. Therefore, miners build mining farms from multiple video cards to increase their hash and connect to mining pools like Hashalot.

Many miners cannot afford to set up a powerful enough farm to mine on their own (solo mining). Therefore, they connect to pools. The miner’s benefit is that you can mine cryptocurrency at any capacity without any problems. The benefit of the pool is that it retains a commission. Usually, the commission reaches 5% for pools. Hashalot has only 2% when mining Ethereum and Ethereum Classic.

The platform combines the power of all miners to search for a block together. This greatly increases the chances of finding him.

The chance of finding a block is called the Luck Rate. It usually containes 5-10% in solo mining. More powerful farms have up to 50%. Luck always tends to 100% in theory, but it works for pools, not for individual miners in reality. 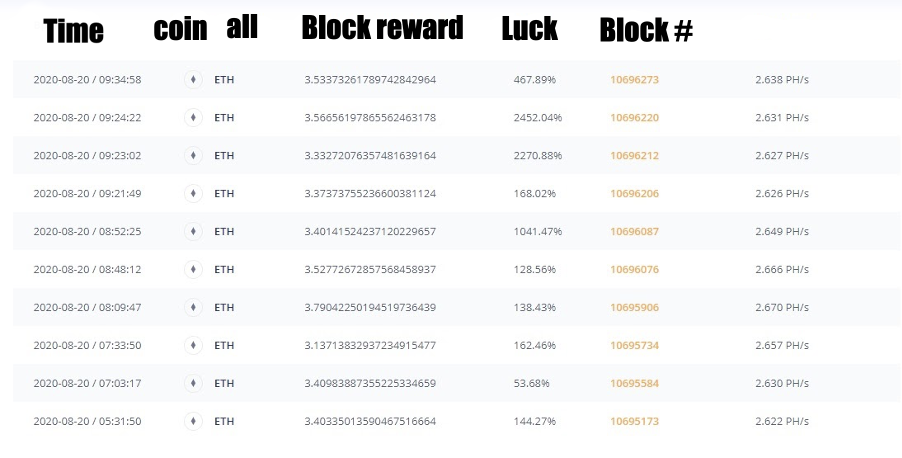 *You can see that luck is even more than 100% in most cases in the picture. The picture is taken from Blocks section

Let’s imagine that there is a box of the balls. It has 99 white balls and one black one. Every day you are asked to take out one ball out of a hundred. It seems that you will, on average, get one ball every hundred attempts. But in reality, you may not get a single ball out of a thousand attempts – and then all your farm costs will be in vain.

The pool greatly increases the chances of success. It looks more like you are pulling 95 balls out of 100. In theory, you can still be such an unlucky miner that you will not come across a black ball even once in a hundred days, but this probability will be negligible. That is, the risk pays for the commission.

Part 4. How much do miners earn

The GPU video cards are used for mining most often. ASIC devices (ASIC miners) are also used quite often. It depends much on the equipment itself. Older devices use less energy and have lower hash rates. Accordingly, new video cards and ASICs are more expensive, but more profitable in the long run.

One normal video card costs up to $ 500 on average. The most expensive ones are up to 2-3 thousand dollars. At the same time, it can bring from 50 cents to two dollars a day. Thus, if we add the cost of electricity to all this, the equipment can pay off in 1.5-2 years, if the situation is successful. Why in case successful situation? It depends much on the course. You can either sell the cryptocurrency right away (provided that the rate is high enough so that you do not remain in the red), or keep it in your wallet and wait for the moment. By selling cryptocurrency at the right time, you can increase your income by another 10-30%. 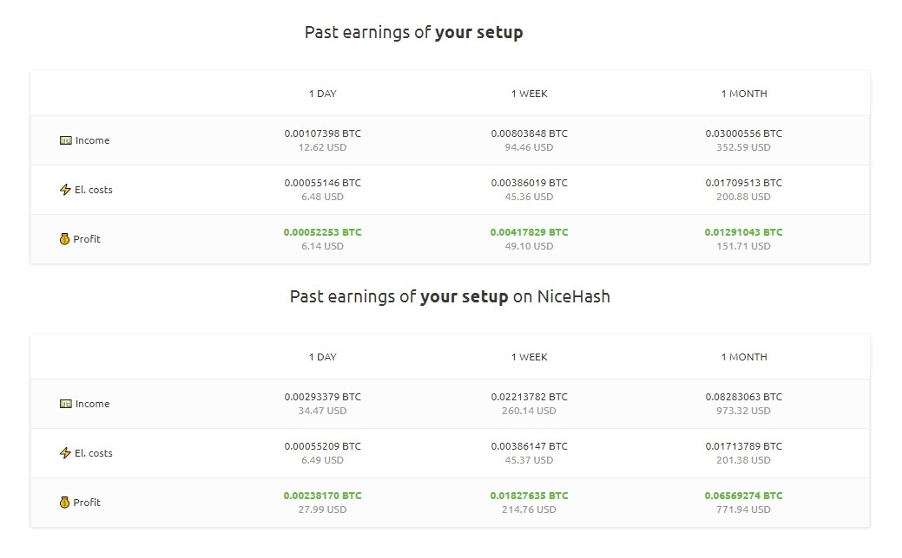 You can see the income report in the Minestats section.

At the time of this writing, income after deducting electricity up to $ 400-600 / month with an investment of $ 8-10 thousand can be considered adequate. In doing so, risks must be taken into account. In the event of a sharp drop in the exchange rate, mining will become unprofitable, and the market value of equipment in the secondary market will also fall.

Part 5. The future of mining and possible risks

Now the mining of cryptocurrencies remains a working and profitable income scheme. The blockchain has its own difficulties, but it also copes with the tasks set. Even problems such as transaction processing speed and limited block size already have a technical solution.

At the same time, there are still risks that could put an end to the cryptocurrency mining industry in the next 5-10 years.

Like this. We hope you understand what mining is in simple words now. Read other articles on our blog to find out more.

Connect to our Hashalot mining pool.

How to earn Bitcoin: practical ways to make digital money

Apart from direct investments into cryptocurrency, there are ...
5

Ethereum wallet - how to choose and to create

Cryptocurrency wallets play a critical role in the use of ...
No one has left a comment yet
Write a comment